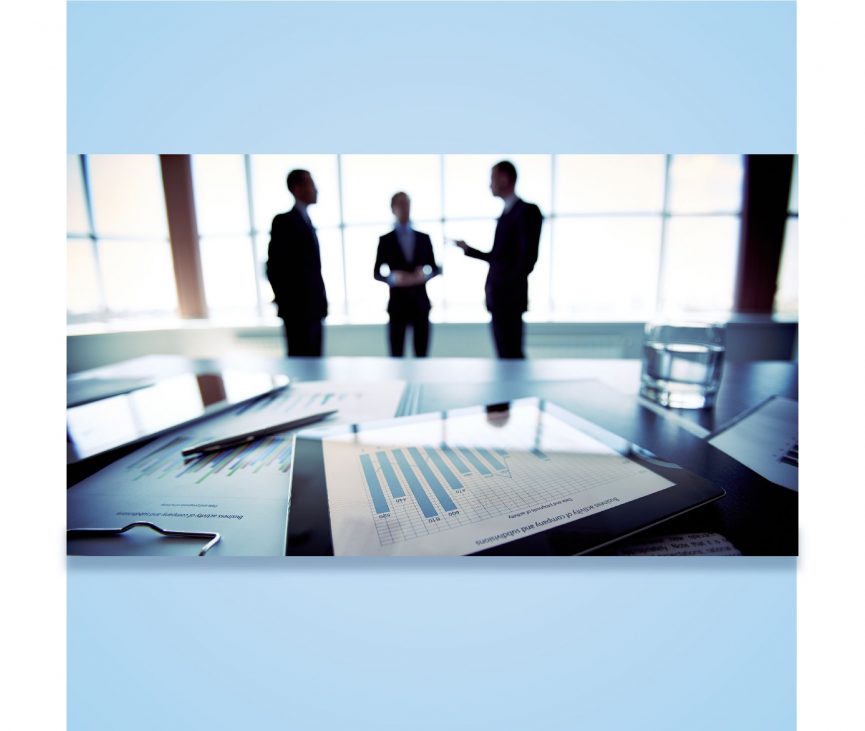 The 2nd quarter began in April with trepidation among investors as the U.S. stock market continued its advance in the face of modest real GDP growth, which on its third revision was increased to a 1.40% annualized growth rate for the first quarter compared to an initial reading of only 0.70% growth. Weakness in consumer spending has been a drag on growth and inconsistent with recent consumer confidence surveys which had indicated strong levels of confidence, bolstered by a low 4.30% unemployment rate. Inflation expectations remain tempered and have been lowered to 1.60% for 2017 but unchanged at 2.00% for calendar years 2018 and 2019.

In June, the Federal Open Market Committee (FOMC or “the Fed”) approved the second interest rate hike of 2017 with a 0.25% increase to the federal funds rate, now targeting the 1.00% to 1.25% level for short term rates. They cited strength in the labor market and positive GDP growth, but expressed some concern to hike because of inflation running below their 2% annual target. The median 2017 target for the fed funds rate continues to be 1.40%, indicating that there will be one more rate hike before the end of 2017.

Also, in the effort to provide transparency, the Fed unveiled its plan to reduce its balance sheet from the current level of roughly $4.5 trillion. Recall the Fed engaged in quantitative easing – also known as QE1, QE2, QE3 – wherein they purchased bonds in the open market. Now the Fed plans to unwind by gradually phasing out reinvesting principal payments of maturing treasury and mortgage-backed securities, starting at $10 billion per month and increasing quarterly until the run-off reaches $50 billion per month.

Despite the Fed rate hike and its unveiling of the balance sheet normalization plan, long-term treasury yields remained tame during Q2 resulting in the 10-year U.S. Treasury yielding just under 2.14% in late June. It wasn’t until mildly hawkish (interest rate increase) comments from Mario Draghi, President of the European Central Bank (ECB), that jolted fixed income markets, did we see an increase in the U.S. 10-year yield back up to 2.30% in the last few days of Q2, 2017. Draghi’s comments came as a surprise to markets and displayed how sensitive global investors are as easy money policies start to reverse around the world. His comments paper the way to address increasing pressure for the ECB to reign in its stimulus programs as Eurozone growth has surged, with manufacturing and service sector activity growing at a rate of 0.70% in the second quarter, the best rate since 2011.

Historical evidence shows that most recessions have been preceded by a flattening of the yield curve, but also true is that roughly half of the time, instances of a flattening yield curve have not resulted in a recession. Therefore, it’s best to take a measured approach and view the flattening yield curve as something to be monitored, but not necessarily indicative of a pending recession. We do not believe there is a risk of recession for the US or any international developed country in the coming 12-18 months. 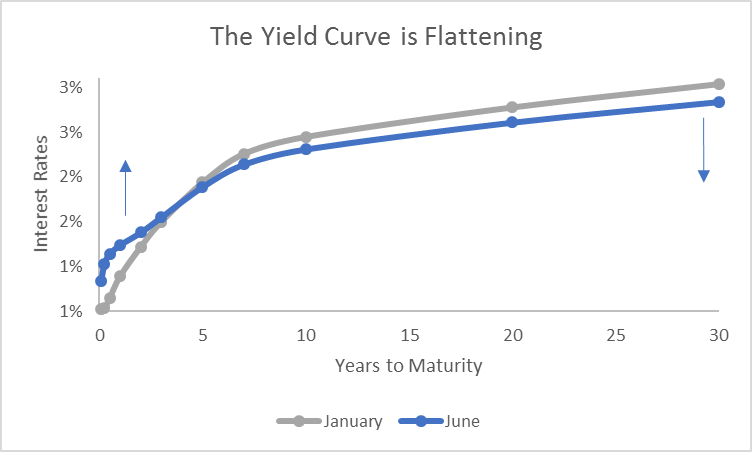 In the meantime, an investor should realize that this flattening yield curve can have some positive real-world implications. Remember when savings accounts actually came with a decent interest rate? We should see interest rates on savings accounts and money markets rise as the Fed continues to gradually raise rates. Meanwhile, the downward pressure on long-term rates means lower mortgage rates, making a new home purchase or a refinancing of an existing mortgage an attractive proposition. Investors should focus on these opportunities, rather than fret over the possibility that the yield curve is ushering in a new recession.

We believe intermediate to long term interest rates will not rise sharply and therefore investors should not be fearful of Fed interest rate increases for now. In general, the world economy is currently in a synchronized economic expansion which is typically good for investment portfolios.

US equity markets broke out to the upside in mid-April, after moving sideways during the second half of Q1 2017. Large Caps outperformed Small and Mid-Cap equities during the quarter. Health Care was the best performing US sector during the quarter, up 6.98% as measured by the SPDR Health Care ETF (XLV). The worst performing sector, and the only one with a negative return during the quarter, was Energy (SPDR ETF ticker XLE), which was down -6.50%. Energy has struggled as the price of oil has taken a hit this quarter, as Brent crude oil had tumbled 20% from a high in mid-April of $56.23/barrel to a $44.82 low in late June. The May announcement of extending the production cuts of crude oil by OPEC members and non-members did nothing to curtail the selling until Brent prices found some support at the $45/barrel level to close out June and Q2 around $48.

The sharp downturn in oil has adversely affected the high yield debt market in Q2, but not to the extent that it did in Q1 2016. The thought is that US energy producers are more efficient than ever and more resilient to shocks in the price of oil since the wave of bankruptcies that rattled the industry last year. With breakeven costs now at $35 or even lower for some shale oil plays, expect domestic drillers to continue increasing output until oil prices reach equilibrium. Hanlon is keeping a close eye on the high yield market for retail companies as the next wave of defaults could come from the so-called “Retail Apocalypse”. The highly-leveraged retail sector struggles with competition from online retailers (Amazon) and from declining foot traffic at traditional shopping malls.

Throughout April, our tactical research recommended that we remain fully invested with respect to US equities until capitulation in the energy market stemming from a global oil supply glut triggered a sell signal for the entire energy sector. The below chart illustrates the continued under performance of the energy sector, which is down 6.5% in Q2 alone. Energy is represented by the Energy Select Sector SPDR ETF (XLE), a market-cap weighted ETF consisting of the largest energy companies, with Exxon and Chevron consisting of 40%.

In mid-May, after a prolonged absence, volatility spiked on the news of the appointment of special investigator Robert Mueller, who will oversee the investigation into the Russian probe. The sharp downturn, coupled with the poor breadth among market participants, signaled the need for caution in the tactical portion of the equity portfolio. In this effort, we scaled back to a 50% weight in the following sectors – Industrials, Consumer Discretionary, Consumer Staples, Healthcare, Technology, and Financials. We’ve remained fully invested in the Materials, Utilities, and Real-Estate sectors.

The mid-May pullback so far has proved to be fleeting as US equity markets have somewhat regained their positive momentum and this time without significant help from the high-flying Technology sector. If the market is to continue to rise, it may have to look for new leadership. Our research suggests that Financial names may emerge as Dodd-Frank financial regulations are eased due to bi-partisan consensus that those regulations went too far. In late June, financial stress tests administered by regulators showed 34 of the top 35 financial institutions were in very good financial condition, leading the way to potential increased share buybacks and dividend payouts. Also, net interest margins should eventually improve, thereby boosting profitability for the Financial sector. We are now back to a full market weighting in the Financial sector, as of June 14th.

In the Hanlon Managed Income Strategy, our tactical research compelled us to completely sell out of the high yield position near the end of Q2. Domestic high yield bonds, as measured by the iBoxx USD Liquid High Yield Index, were unable to maintain their most recent high and are basically unchanged from the peak in late February. We contend that there is too much risk in this environment that includes a volatile oil market, tight credit spreads, and possible increase of defaults in the retail sector as Amazon continues to disrupt.
As always, we at Hanlon will always try to do what’s in the best interest of our clients consistent with our principals of Passion, Integrity, Vision, and Care. We will continue to monitor for opportunities and look-ahead for dangers in the Tactical portions of the portfolio for downside protection and upside participation, especially so in the summer season months when markets have been historically characterized by high volatility.

This Quarterly Report contains general information that is not suitable for everyone. The information contained herein should not be construed as personalized investment advice. Past performance is not a guarantee of future results. There is no guarantee that the views and opinions expressed in this Quarterly Report will come to pass. Investing in the equity and fixed income markets involves the risk of gains and losses and may not be suitable for all investors. The use of a Financial Advisor does not eliminate risks associated with investing. Consider the investment objectives risks, charges, and expenses carefully before investing. Information presented herein is subject to change without notice. Hanlon has experienced periods of underperformance in the past and may also in the future. Hanlon is an SEC registered investment adviser with its principal place of business in the State of New Jersey. Hanlon is in compliance with the current federal and state registration requirements imposed upon registered investment advisers. Hanlon may only transact business in those states in which it is notice filed, or qualifies for an exemption or exclusion from notice filing requirements. This Quarterly Report is limited to the dissemination of general information pertaining to its investment advisory services and is not suitable for everyone. Any subsequent, direct communication by Hanlon with a prospective client shall be conducted by a representative that is either registered or qualifies for an exemption or exclusion from registration in the state where the prospective client resides. For additional information about Hanlon, including fees, services, and registration status, send for our disclosure document as set forth on Form ADV using the “Contact” link at the bottom of www.hanlon.com or visit www.adviserinfo.sec.gov. Please read the disclosure statement carefully before you invest or send money.