As we commenced the 3rd quarter, GDP for the 1st quarter had just been revised upward from 1.2% to a “still modest” 1.4% in the 3rd estimate. The Federal Reserve’s acknowledgment of this tepid pace of economic growth was apparent in Fed Chair Janet Yellen’s dovish comments on July 12th during the Fed’s mandated semi-annual Monetary Policy Report to Congress. Yellen indicated that the Fed may not need to hike rates much more this year and that rates were close to a “neutral level”, which is the point where the Fed’s benchmark rate will neither accelerate nor restrain the economy.

“Because the neutral rate is currently quite low by historical standards, the federal funds rate would not have to rise all that much further to get to a neutral policy stance,” Yellen testified to Congress. Yellen further stated that“gradual rate hikes” will still need to be implemented over the next few years. Yellen’s comments were more dovish than anticipated and bond yields and the US dollar fell in response to her testimony, while US stock futures jumped higher on expectations that the Fed’s dovish stance could help propel the bull market yet higher. But Yellen made clear in her comments that the Fed’s efforts to normalize policy from its historically accommodative position has been hindered by low inflation. Yellen explained that the committee would be “monitoring inflation developments closely” and base policy decisions accordingly.

The dovish interest rate outlook changed on September 14th when the Bureau of Labor Statistics released the August Consumer Price Index data. US consumer prices accelerated in August due to a jump in the cost of gasoline and rents, signs of firming inflation that could allow further monetary policy tightening from the Federal Reserve. The Labor Department said that the Consumer Price Index rose 0.4% for August, versus a rise of only 0.1% in July. The August rise in inflation was the largest in seven months and lifted the year-on-year increase in the CPI to 1.9% from 1.7% in July.

Inflation was partially boosted by gasoline prices, which surged 6.3% in August after being unchanged in July. More gas price increases were seen in September after Hurricane Harvey forced closures of refineries in Texas. While it is likely that Federal Reserve officials will treat the gasoline-driven rise in the CPI as temporary, there were broad gains in other components of the monthly core CPI that are supportive of Fed’s desire to normalize rates at a higher level. 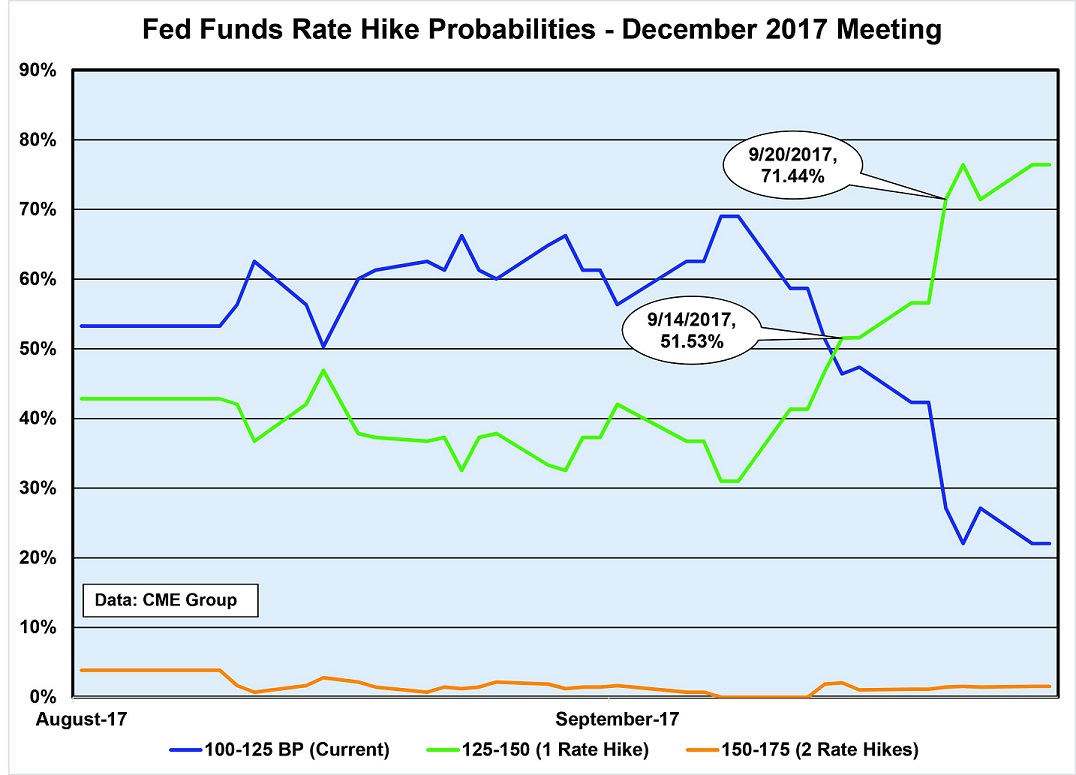 After the conclusion of the September meeting, the FOMC also announced that it would begin winding down its $4.5 trillion balance sheet using the normalization plan it announced at its June meeting. Recall the Fed engaged in quantitative easing – also known as QE1, QE2, and QE3 – wherein they purchased bonds in the open market to support economic activity. The Feds balance sheet is another monetary tool used by the Fed to accelerate or dampen economic activity. Starting in October, the Fed will begin reducing its balance sheet at a pace of up to $10 billion per month for the fourth quarter, increasing that to a $20 billion monthly pace in the first quarter of 2018, $30 billion in Q2, $40 billion in Q3, and $50 billion in Q4. After that, the Fed is projecting it would maintain that $50 billion monthly pace until it’s satisfied with the size of the balance sheet. This is no different than what the Fed said it would do three months ago, at the meeting in June.

With the FOMC finally announcing a reduction in its balance sheet, all eyes will now focus on the European Central Bank (ECB) and its President, Mario Draghi. Central bank watchers will eagerly be waiting to see if the ECB will finally start to taper its monthly asset purchase program, its own version of quantitative easing (QE), at its October 26th meeting. The ECB announced September 7th that it was leaving interest rates unchanged and said that it stands ready to extend its monetary stimulus program as needed. But this dovish move was countered by President Mario Draghi announcing that the Governing Council will decide the fate of its quantitative easing program at its October meeting.

This potentially hawkish move has some expecting the ECB could announce a reduction in its monthly asset purchases soon. Currently, the rate of purchases is set at 60 billion euros ($72 billion dollars) each month. The ECB had previously announced the time frame for the program was for it to end in December, with the economy showing signs of strengthening many expect a move sooner. It seems highly unlikely that the program would be terminated completely and conventional wisdom is that the program will be tapered down.

So as far a monetary policy goes, both here in the US and abroad, all appears to be going well, with no surprises recently or on the horizon. This should bode well for equity and fixed income markets.

The S&P 500 index was in an extended trading range throughout the month of June. As the 3rd quarter started, the S&P 500 index rallied sharply, breaking out over the June highs to set new all-time highs. This rally lasted until August when North Korean leader Kim Jong Un, affectionately known by President Trump as “Rocket Man”, began launching missiles over Japan into the Pacific Ocean and engaging in saber rattling and back and forth dialogue with Trump. This disquieted markets, leading to a downtrend during the month of August including a pair of one-percent-plus down days. Towards the end of August, the S&P 500 regained its footing and began to rally as September began, when the index broke over its July highs and registered a string of new record highs. This market is nothing if not resilient. For the 3rd quarter, US Small Caps (as represented by the S&P 600 Index) returned 5.96% and outperformed US Large Caps (as represented by the S&P 500 Index), which added 4.48%. US Mid Caps (as represented by the S&P 400 Index) gained 3.22%.

West Texas Intermediate Crude (WTIC) has been in an uptrend since the end of June which has helped to power the Energy sector’s out-performance. On June 30th WTIC closed at $46.02 and has rallied to end the quarter at $51.67, an increase of 12.28%. The resurgence of oil has provided a tailwind for the high yield debt markets in the 3rd quarter. High yield debt as represented by Merrill Lynch High Yield Master II Index is up 2.02% for the 3rd quarter.

We entered the 3rd quarter with our technical research recommending a cautious positioning of a 50% weighting in the following sectors; Industrials, Consumer Discretionary, Consumer Staples, Healthcare, and Technology. We came into the quarter completely out of the Energy sector due to the severe downtrend in oil, which led to the sector being down -6.5% during the 2nd quarter. Our research had us fully invested in the following sectors; Financials, Materials, Utilities, and Real Estate.

The S&P 500 had a solid month in July, up roughly 2.1%. This freshening in the market, combined with signaling from our indicators, led us to become fully invested in all sectors, except for the Energy sector. The damage done in the Energy sector was so severe that our indicators remained cautious on this sector. During July, we also added Mid Cap and Small Cap positions in our equity holdings.

In the Hanlon Managed Income Strategy, as we entered the 3rd quarter, we were defensively positioned in cash and cash equivalents, with a small allocation (roughly 10% of the Managed Income Strategy) invested in Municipal Bonds, Convertibles, and Emerging Market Sovereign Debt. This defensive positioning was in response to turbulence experienced in the high yield markets during the 2nd quarter that triggered our defensive indicators. But as the 3rd quarter progressed the high yield markets strengthened and our technical indicators recommended a fully invested posture. During July, we became fully invested in the Managed Income Strategy, investing heavily in US High Yield.

Equities performed well in the 3rd quarter, as reported above. The All-Weather models continued to benefit from our significant allocation / overweight exposure to international and emerging market equities.

As always, we at Hanlon will always try to do what’s in the best interest of our clients consistent with our principles of Passion, Integrity, Vision, and Care. We will continue to monitor for opportunities and look-ahead for dangers in the Tactical allocations for downside protection and upside participation, especially so as we enter the Fall season months when markets have been historically characterized by high volatility.

The S&P 500 Index is an unmanaged index of US large-cap stocks, and is widely used as an indicator of US market trends. The S&P 600 Index is an unmanaged index of US small-cap stocks. The S&P 400 Index is an unmanaged index of US mid-cap stocks. The Bank of America Merrill Lynch US High Yield Master II Index is a composite index for high-yield U.S. Corporate Bonds. You cannot invest directly in an index. This Quarterly Report contains general information that is not suitable for everyone. The information contained herein should not be construed as personalized investment advice. Past performance is not a guarantee of future results. There is no guarantee that the views and opinions expressed in this Quarterly Report will come to pass. Investing in the equity and fixed income markets involves the risk of gains and losses and may not be suitable for all investors. The use of a Financial Advisor does not eliminate risks associated with investing. Consider the investment objectives risks, charges, and expenses carefully before investing. Information presented herein is subject to change without notice. Hanlon has experienced periods of underperformance in the past and may also in the future. Hanlon is an SEC registered investment adviser with its principal place of business in the State of New Jersey. Hanlon is in compliance with the current federal and state registration requirements imposed upon registered investment advisers. Hanlon may only transact business in those states in which it is notice filed, or qualifies for an exemption or exclusion from notice filing requirements. This Quarterly Report is limited to the dissemination of general information pertaining to its investment advisory services and is not suitable for everyone. Any subsequent, direct communication by Hanlon with a prospective client shall be conducted by a representative that is either registered or qualifies for an exemption or exclusion from registration in the state where the prospective client resides. For additional information about Hanlon, including fees, services, and registration status, send for our disclosure document as set forth on Form ADV using the “contact us” link at www.hanlon.com or visit www.adviserinfo.sec.gov. Please read the disclosure statement carefully before you invest or send money.