“Earnings no longer matter… The only thing that matters is survival.” 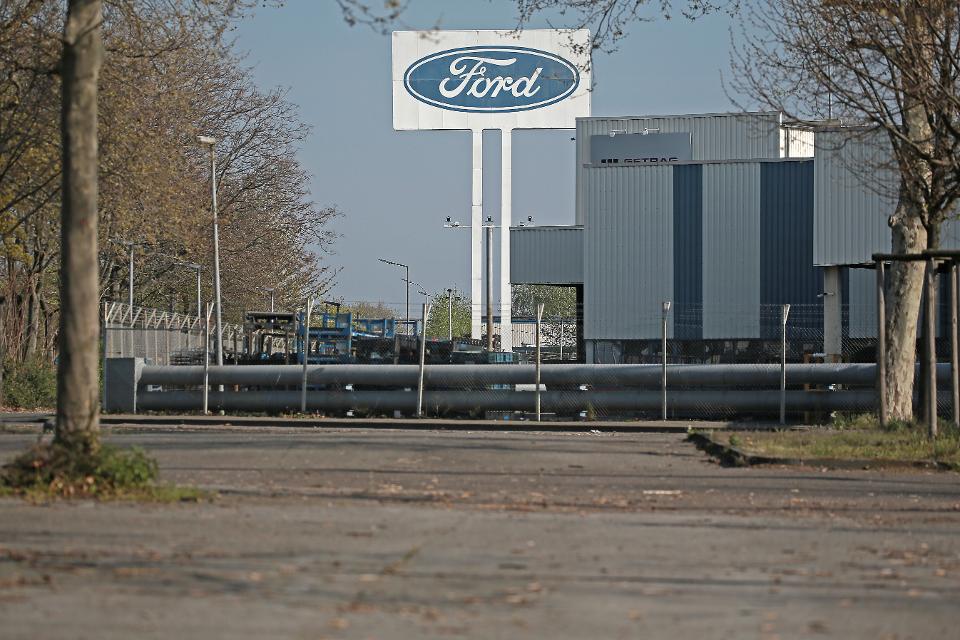 08 April 2020, North Rhine-Westphalia, Cologne: The parking lot in front of the Ford factory is empty. To contain the coronavirus, NRW has banned all accumulations of three or more people in public. Photo: Oliver Berg/dpa (Photo by Oliver Berg/picture alliance via Getty Images)

This is part of a series of posts dealing with the impact and implications of the COVID-19 pandemic for the Financial world.

Seen and understood to be what it truly is, a “computer,” of a sort, the financial market is amazing. It swallows up data from millions of sources, rapidly and continuously, capturing nuances and complexities of fact and sentiment that may lie very deep, and feeds the information back to us embedded in the prices of financial instruments. But interpreting these price signals is not always easy. Sometimes the truth comes in layers. For instance…

Ford is in trouble. Its U.S. manufacturing operations are shut down, and there is no restart date. European operations have halted. Mexican plants are closed. Billions in losses are projected. The dividend has been scrapped. The firm has drawn down its entire credit line. Even so, there are said to be just 6 months of cash left. Maybe.

For the first time since World War II, Ford is not making cars. Its shares are down 50%. Dire outcomes are being priced in. An American icon is seemingly on the rocks.

But Ford’s bonds tell a different story, one that appears to be at odds with the storm of bad news. Bonds of course trade also, just like shares of stock, and their prices fluctuate, like stock prices, though usually in a much narrower range anchored to the bond’s “par value.” Bond prices are typically quoted in “cents on the dollar,” and par is nominally set at 100. Back in January, before the COVID crisis hit the United States, Ford’s 7.45% bonds (due in 2031) were trading at 120 cents on the dollar, or a yield of about 6.2%. That is, they were priced at a substantial premium to par value, no doubt due to the attractive return, from a well-known company, pulling in plenty of buyers hungry (as they say) for yield – especially in a fixed income environment anesthetized by years of “accommodative” monetary policy from the Federal Reserve.

Then came le déluge. The COVID panic hit full force in mid-March. Equity markets fell. Bond prices fell. Ford was vulnerable. By April 8, its bonds traded at 68 cents on the dollar – a huge discount, deep into the “distressed debt” zone where default looms as a real possibility. Much of Ford’s debt had been downgraded to “junk” status.

(“Junk” is actually a technical term in finance for bonds that don’t meet certain standards of risk and credit-worthiness, though synonyms such as “high yield” or “speculative grade” are more polite. The Junk market is very large, and up to a point it is respectable enough these days, for those who understand the high level of default risk it entails. But it is considered unsuitable for many investors. Pension funds, insurance companies and other large buyers of fixed income products are often prohibited by their own charters from owning such risky bonds. The downgrade forces them to sell, and prevents them from buying.)

Ford has issued a great deal of debt that is now junk-rated – $36 Billion – slightly more than the primary debt load of the government of Ford’s home state of Michigan. The company is now in fact the “single largest issuer of below-investment-grade debt.” With manufacturing operations halted, and operating cash flows headed towards zero, Ford could reasonably be seen as the type specimen of a dangerously over-leveraged enterprise.

That was the situation as of April 8. But then, the very next day, April 9, these bonds jumped, closing up sharply to 81 cents. A few days later they reached almost 90 cents on the dollar – up 32%.

It’s the sort of spike you expect from the stock of a high-flying tech company, not from “fixed” income paper issued by a rust-belt dinosaur. But over the last month, Ford’s crummy bonds have outperformed all of the FAANG stocks (Facebook, Apple, Amazon, Netflix, Google).

What happened to so suddenly and decisively re-value this “junk”?

What happened was a flexing of the federalist muscle of the American system. On April 9, the Federal Reserve announced an extraordinary expansion of its program of buying bonds in the open market (“quantitative easing”). It was not just the expanded scale, although that was breathtaking – the Fed promised “unlimited buying” of government bonds, what one pundit called “QE Infinity.” It was also that they proposed a qualitative metamorphosis of the QE program. Previously the Fed’s shopping list had been limited to ultra-safe Treasury bonds and government-backed mortgage bonds. Now, as part of the COVID crisis response, the Fed has announced that it will buy corporate bonds. It will buy new bonds directly from the companies that issue them – that’s new money, channeled directly to corporate issuers. It will buy previously issued corporate bonds trading in the secondary market – that’s price support for existing issues, to calm the markets and bolster companies’ access to capital. It will buy Exchange Traded Funds (ETFs), indexed vehicles based on large portfolios of individual bonds – which is arguably a direct fillip to smaller scale investors, for whom ETFs may be the preferred way to play the fixed income market.

But the Fed has gone where the other central banks have not yet dared to go. It will now buy not just government bonds and “high quality” corporate bonds, it will also buy corporate “junk” bonds. Like Ford’s.

This is very significant, in two respects. First, buying any type of corporate bonds – and especially corporate junk bonds – will expose the Federal Reserve’s balance sheet for the first time to credit risk – that is, to the possibility that some of the bonds it buys may default, and/or suffer an extreme loss of value (as Ford’s bonds did in March). Treasurys and other government-backed bonds are said to carry no credit risk, because the government can always print money to cover them. Ford has to earn money to cover its debts, which means it has to have sustainable business. It has to be profitable, at least over the long term. By owning Ford’s debt, the Fed now owns Ford’s operational and strategic challenges. Will the customers keep buying its trucks? Will a key plant be hit with a labor stoppage? Will the company make a successful transition to manufacturing and selling electric cars? Will Ford survive the shutdown, and the post-COVID restart, and do well enough to meet its obligations to its bondholders? Questions like these are what credit risk is all about.

Taking on this type of risk will challenge the Fed’s traditional skill-set. Its macro-economists don’t have much experience in evaluating individual companies, their business models, management teams and market prospects, or assembling and managing complex portfolios of the securities they issue. In 2008, the Fed was forced to take on similarly risky assets from some of the casualties of the financial crisis (AIG, Bear Stearns). It turned to BlackRock, the world’s leading asset management firm, for help in managing these strange and risky portfolios. Now, the Fed has turned once more to BlackRock to set up and run the new vehicles used to buy and hold the corporate debt it will accumulate in this enhanced version of QE. It is an extraordinary partnership, to enlist self-interested private sector expertise in service of public policy, reminiscent of the way the original J.P Morgan once managed financial crises before the Fed was created.

But the real importance of this move is that it injects the Federal Reserve into the economy in a new role, which the Ford case illustrates.

Ford urgently needs to raise new money to deal with the impact of the crisis, but until April 9 the price would have been very steep. As an over-leveraged company with impaired credit, things might have become very tricky indeed. Ford narrowly avoided the bankruptcy fate of its peers (GM and Chrysler) in 2008. Its current market value of $20 Bn is close to the 2008 level. Its total liabilities are 10 times that.

Now, a week after the Fed’s initiative, Ford has announced an offering of $8 Billion of new bonds, some of which will likely be purchased directly by the Fed. The company expects to pay between 8.5% and 9.625% interest – two and a half times what it cost Ford to issue similar bonds two months ago – steep, but much less than the loan-shark-like 18% that Ford had to pay to raise money during the 2008 financial crisis. We can infer that the Fed’s move has lowered Ford’s cost of capital by perhaps half, which the jump in the market prices for its existing bonds would tend to confirm.

In short, the Fed found a creative way to throw a lifeline to a distressed company, one that is important in many ways to the health of the U.S. economy.

This is something new under the American sun. Suddenly, and a bit stealthily, the Central Bank has gotten into the business of “business.” The Fed will have to learn how to make decisions about new sorts of questions emanating from the private sector. And not every distressed company will merit their investment. Perhaps the Federal Reserve will soon be “picking winners and losers,” or so it seems to many observers, who are not necessarily happy with this development. Barron’s called the Fed’s move a “troubling marriage” of the government and the private sector, and warned “the Fed is ultimately using private money to prop up dicey debtors.” To some it stinks of “moral hazard.” Or, worse, “industrial policy” – something that Americans have generally shunned.

But the line has been crossed, and it may not be reversible. It would never have happened without the imperative of the COVID pandemic. And the most important fact about this is: the market buys it. The group mind of the investing world believes, apparently, that the U.S. government is truly in this for the long haul, and will be active in helping ease the stress on the weaker companies in the economy that have been caught in a crisis not of their own making. This is why the value of Ford’s bonds, and high yield bonds generally, rose so dramatically, and raised the likelihood that Ford and other companies will survive this.

And so – we may say that we now have a new player in the real economy: the Federal Reserve Inc.

Mark this as another feature of the financial landscape that the COVID crisis has changed in an important way, and probably “for good” (in both senses).