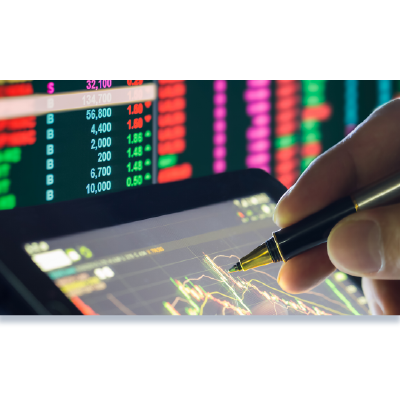 January’s 5.73% gain in the S&P 500 was the index’s best start to a year since 1990. But February has suddenly ushered in the return of volatility, which has been virtually absent from equity markets for the past year. A dramatic and sudden two-day plunge put the S&P into negative territory for the year, erasing January’s gains. In this commentary, we will explore some reasons for the selloff and discuss where we think we will end up when the dust settles.

Equity markets have been on a tear since the 2016 US Presidential Election. From November 4th, 2016 to the peak of January 26th, 2018 the S&P 500 returned a staggering 41.2% on a total return basis and the Dow Jones Industrial Average gained 53.3%. Perhaps even more remarkable is how markets continuously advanced without a significant pullback in this period. During the period, the biggest drawdown in the S&P was during March 1st through April 19th of 2017, when the index fell 2.6%. Prolonged uptrends like this will often trigger fears of stock market bubbles, and many pundits have worried whether stocks ran up too far, too fast. The difference in the post-election advance and prior bubbles however, is that the economic and earnings data has justified the valuations. GDP growth, unemployment numbers, manufacturing data, and more are all indicative of a robust economy. International data is similar, which is important since so many US corporations operate globally. Earnings growth has also been solid and we haven’t seen speculative overvaluations as was the case in periods such as the dot-com bubble.

Taking the above into account, the impressive runup in stocks seems justified. The lack of volatility is also understandable when we consider that the number one fear of investors – rising interest rates – has been held in check due to what has been described as a “Goldilocks” economy, marked by growth without inflationary pressure. So why has volatility suddenly returned with a vengeance?

The below chart shows how the S&P began to pull away from the intermediate-term trendline, shown in green, as 2017 ended. This pickup was largely triggered by anticipation of the tax reform package and its passage in late December. As 2018 commenced, it was off to the races as analysts adjusted their earnings forecasts to account for the tax windfall that would be coming to US corporations. Economic data remained in “just right” territory, bolstering a surge in equity markets. 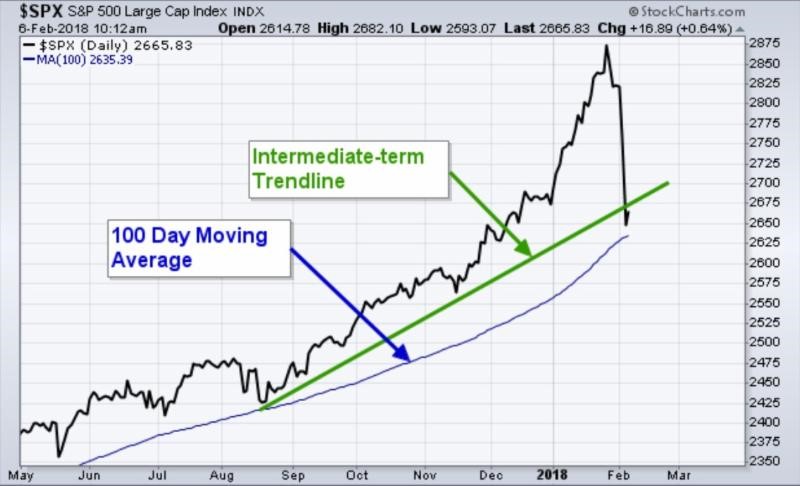 All this changed in February, when investors were served a piping hot bowl of porridge in the form of the January jobs report. The data was good, too good in fact. Investors keyed in on wage growth, up 2.9% on an annualized basis. The fear is that as workers’ wages grow, they increase consumption of goods and services. This in turn allows corporations to increase prices, spurring inflation. An uptick in inflation would presumably prompt the US Federal Reserve to enact more restrictive monetary policy – i.e. raise interest rates. The 10-Year Treasury Note yield was already creeping up towards 3%, the level last seen during the 2013 “Taper Tantrum”. Further complicating the situation is the changing of the guard within the Fed as Janet Yellen exits and Jerome Powell takes over as Fed Chair. Markets hate uncertainty, and while all indications are that Powell will follow a similar path to Ms. Yellen’s, no one knows for certain how he will react.

So, we understand why a pullback may have been justified and necessary after such a prolonged uptrend. The next question is, why has it been so sudden and violent? The Dow fell as much as 1,600 points during its lowest point on Monday, in trading that resembled the infamous 2010 “flash crash”. The plunge did not coincide with any release of data or sudden geopolitical event. The most likely cause is computer-driven selling, as automated trading algorithms are triggered at certain technical indicators. If prices fall rapidly, there can be a snowball effect as additional sell signals trigger. The pace of the selloff suggests this was the case, and as the losses mounted, buyers – both human and computer – stepped in to erase a portion of the downward move.

One strategy that was clearly affected was the short-volatility trade, which had been a winner during the year-plus market advance. Exchange-traded products that bet on lower volatility had attracted $2.4 billion in assets as of November 2017. Many of these inverse volatility products employ two or three times leverage. Some of these products were halted in advance of Tuesday’s open, and may end up liquidated when this is all over. In addition, many systematic trend-following approaches use volatility as a trading trigger. The below chart shows the sudden spike in volatility, which put the squeeze on the shorts and caused many strategies to head to the exits on their equity holdings. 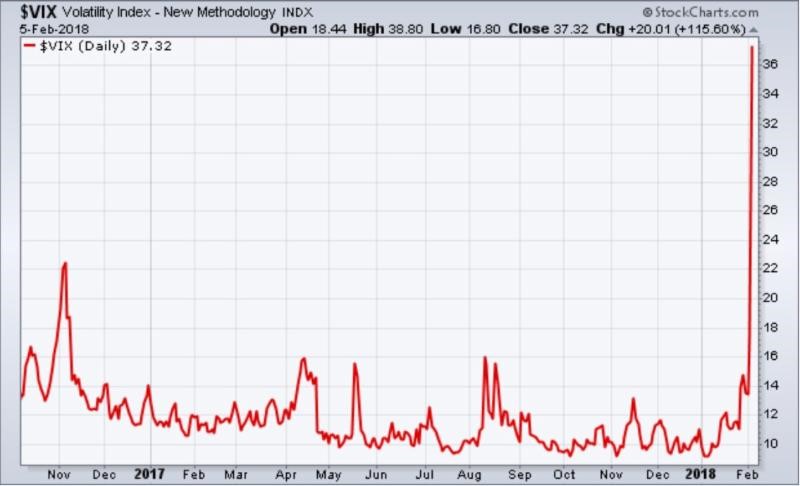 Where the current selloff bottoms out is up for debate, but we feel that this is not the start of a recession and that support will be found somewhere around the 100-day moving average. Investor psychology will factor in somewhat, as many retail investors have been increasing their equity allocations or taking on more risk than they should be due to “fear of missing out”. Now that volatility has returned to the markets, it may cause additional panic selling from investors who have misallocated their assets in accordance to their risk tolerance. There could be additional selling that puts this selloff into official “correction” territory, defined as a 10% pullback from the high. At some point though, buyers will enter and markets should stabilize.

Hanlon Investment Management employs proprietary tactical trading signals, designed to provide investors with peace of mind during extreme market turmoil. The last week’s sudden pullback may be jarring for investors, but does not warrant an immediate move to cash. Hanlon’s approach can be deemed “intermediate-term trend-following” and attempts to filter out short term market “noise”, since our research shows that the market often rebounds sharply after sudden pullbacks. Reactively trading after the downward move increases the likelihood of locking in the losses and missing the subsequent rebound. Rather, we try to avoid what we feel will be longer, sustained downward moves in the markets.

Such pullbacks as the one we are experiencing now can cause some panic but rest assured that we are monitoring the markets daily. Over the last year (including the current pullback) our Hanlon Models have performed extremely well; the Hanlon All-Weather Growth is up 14.02% while our Tactical Growth is up 7.63%. Our conservative models, the All-Weather Income and Tactical Managed Income, provide a smoother ride. During the one-year period from February 2nd, 2017 to February 2nd, 2018 they have a drawdown of only -3.75% and -2.94%, respectively, compared to the S&P 500 TR index (-7.76%) and the Dow Jones Industrial Average TR index (-8.52%). We are currently still fully invested in equities and our signals have not shown that this pullback is any cause for concern to raise cash immediately. Our high yield signals are beginning to show some weakness and therefore we have begun to lower our exposure to high yields.

Past performance is not a guarantee of future results. This Educational Series is limited to the dissemination of general information pertaining to its investment advisory services and is not suitable for everyone. The information contained herein should not be construed as personalized investment advice. There is no guarantee that the views and opinions expressed in this newsletter will come to pass. Investing in the stock and bond markets involves gains and losses and may not be suitable for all investors. Information presented herein is subject to change without notice. Hanlon has experienced periods of underperformance in the past and may also in the future. Hanlon Investment Management (“Hanlon”) is an SEC registered investment adviser with its principal place of business in the State of New Jersey. Hanlon and its representatives are in compliance with the current registration and notice filing requirement imposed upon registered investment advisers by those states in which Hanlon maintains clients. Hanlon may only transact business in those states in which it is notice filed, or qualifies for an exemption or exclusion from notice filing requirements. Any subsequent, direct communication by Hanlon with a prospective client shall be conducted by a representative that is either registered or qualifies for an exemption or exclusion from registration in the state where the prospective client resides. For information pertaining to the registration status of Hanlon, please contact Hanlon or refer to the Investment Adviser Public Disclosure web site (www.adviserinfo.sec.gov). For additional information about Hanlon, including fees and services, send for our disclosure statement as set forth on Form ADV from Hanlon using the contact information herein. Please read the disclosure statement carefully before you invest or send money. Not all Hanlon clients are in the strategies discussed herein.