“Survival is the keyword for us now.” – Chairman of Huawei 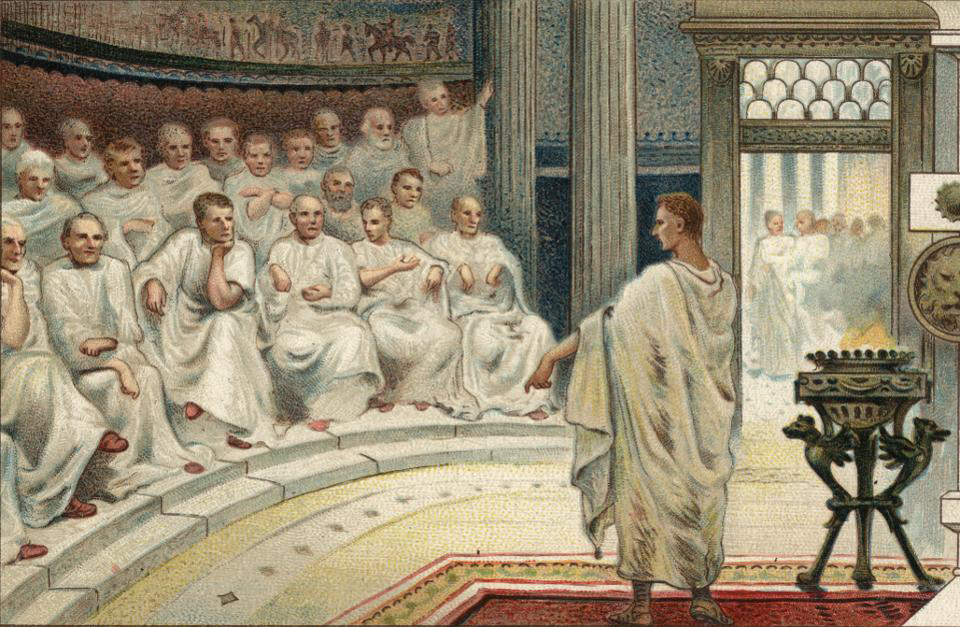 Cato was known for ending his speeches with the expression “Carthago delenda est” (“Carthage must be destroyed”). Illustration from the end of the 19th century. (Photo by Stefano Bianchetti/Corbis via Getty Images) CORBIS VIA GETTY IMAGES

It is now clear that Huawei – the troubled Chinese company that is the world’s largest telecommunications equipment manufacturer – is going to be taken down. Whether down and out, gone for good, or just trimmed back to a second tier player propped up by the Chinese government for the local market – remains to be seen. But the skies are darkening. If recent reports are accurate, as the latest American sanctions bite down, the Chinese telecommunications company “has 12 months left to live.” It’s an election year here in the USA, and may not be a favorable moment to look for leniency towards an “indicted criminal enterprise” based in Communist China. This may be a time to make an example of Huawei.

Consider the constellation of negatives facing Huawei in any effort to rehabilitate its reputation.

Huawei was indicted by American federal prosecutors in 2019 for:

According to the indictment, Huawei is said to have

The flurry of active verbs here is almost Shakespearian.

In February, the leading Democrat and the leading Republican on the Senate Intelligence Committee issued this joint statement:

“The indictment paints a damning portrait of an illegitimate organization that lacks any regard for the law.”

In 2018, Huawei’s Chief Financial Officer, Meng Wanzhou (who is also the daughter of the company’s founder), was arrested in Canada, and will likely be extradited soon to the United States to face charges of racketeering, technology theft, and lying to members of Congress and to the FBI. A conviction would carry a 10-year prison sentence.

Meanwhile, the Senate has just unanimously passed a bill to potentially kick Chinese companies out of the New York stock market, for the plausible reason that they have refused to play by the same accounting rules that apply to all the other companies trading there. Investors have been defrauded, and suddenly the regulators are “very concerned.” Huawei doesn’t trade in NY, but the taint will stick even so.

Finally, the U.S. has placed Huawei on the ominously titled “Entity List” – which bans business with “entities for which there is reasonable cause to believe, based on specific and articulable facts, have been involved, are involved, or pose a significant risk of being or becoming involved in activities contrary to the national security or foreign policy interests of the United States.” This is regarded by some as a death sentence for the company –

“Huawei needs its close relationships with ARM, Cadence, Synopsys, Google and a hundred other partners if it is to maintain its position in the front rank of global vendors. These relationships cannot function if Huawei is on the Entities List…

The Entities List is choking off the lifeblood for Huawei.”

In sum – criminal indictments; supplies of key components cut-off; bans and potential bans on Huawei equipment in countries representing roughly half the world market – not good.

Finally, there is the Big Picture.

Beijing’s move against Hong Kong is an ill-timed blunder in this context. Xi Jinping’s heavy hand has whipped up the negative sentiment surrounding all things Chinese. New political and economic sanctions are now being discussed, including America’s “decertification” of Hong Kong as no longer “autonomous” – a formal assessment, required by U.S. law, which will have adverse consequences for Hong Kong’s role as a financial center and gateway to the Mainland. If things get ugly in Hong Kong, American views will harden considerably.

Then, of course, there is the virus. Whether or not the public health response of the Chinese regime can be faulted in any way is a matter that will be addressed in the fullness of time. But the Chinese political response has been a disaster. The Chinese government’s priority is seen (by many others) as credit-claiming and blame-shifting rather than cooperating to understand the development of the pandemic. China’s “wolf warriors” campaign against external critics, counterattacking every slight; the arrests and suppression of internal critics; the threats of economic retaliation against this who might question China’s actions; the expulsion of Western reporters who ask too many questions; the attempts to hack and steal data from Western medical centers; the bullying and vilifying, whether directed at the EU ambassador, the nation of Australia, or the Houston Rockets… How effective are these actions at creating a positive view of China?

This aggressive policy is a miscalculation of great consequence. China’s relationship with the rest of the world has soured. Its actions have hardened the hearts of its enemies, and alienated those who would normally have been friendly to the Chinese position. They have undone in a few months the good will that China has been striving to build up for the past decade. Bipartisan public opinion in the U.S. has shifted strongly in the negative direction (66%). The negatives are even higher in Canada (67%), Sweden (70%), and Japan (85%), countries that might otherwise be regarded as less bellicose than the U.S. 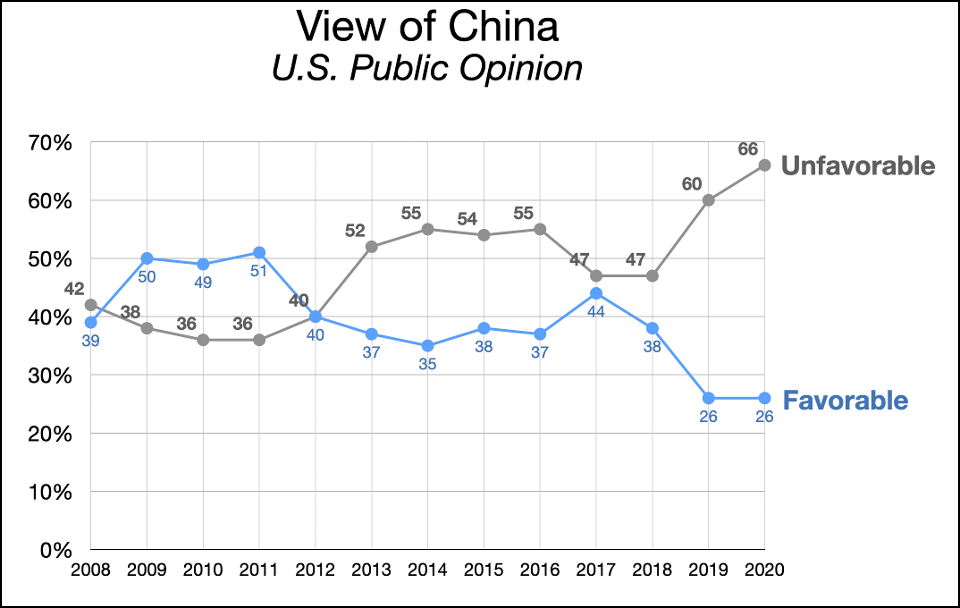 Where then does Huawei fit in?

A half-year ago, the pressure on Huawei — as intense as it was – might have been seen as cueing up a repeat of the ZTE episode from a few years back. ZTE is another state-owned Chinese telecommunications company – Huawei’s twin in many ways, good and bad, guilty of many of the same sins. In 2018 it was dangled over the same precipice, threatened by the U.S. with economic extinction – only to be rescued by a Presidential “pardon” of sorts (widely criticized by China-hawks of both parties), in return for other Chinese trade concessions. The “art of the deal” – Phase 1. ZTE was chastened, forced to admit guilt, and to pay a billion-dollar fine, but was allowed to continue in business. A common view, prior to Covid and Hong Kong, was that a similar “pardon” for Huawei would end up being the clincher, the bargaining chip tossed into sweeten the pot, that would seal the next U.S./China economic deal. Presumably, this was Huawei’s calculation as well.

But times have changed. The U.S. presidential election will evidently feature a vigorous partisan debate over “who is tougher on China.” Politicians from both parties are eager to demonstrate severity. And Huawei is hanging out there, a plump piñata ready to be smacked. China hawks are calling for real punishment this time. And the China doves…. well there don’t seem to be any doves left. Carthago delenda est.

Will it happen? Yes, but it is not clear yet how drastic the outcome will be, whether Huawei will be destroyed, or merely neutered.

Perhaps it is karma, and the company simply deserves its fate, as an “illegitimate organization” that should be put out of business. Perhaps the technical risks are real, and eliminating them becomes a question of national security. Or perhaps it is a matter of finding the right sacrifice to cleanse the relationship.

It may not be fatal for Huawei, but it will certainly be painful – undoubtedly much worse than ZTE’s takedown. China and the U.S. will continue to do business with one another. But the rules of engagement will change. What may be needed is a healthy and clarifying demonstration of the limits of acceptable behavior. Another “gift” of the Covid-19 crisis.